In the mid-1960s, Sibylle Bergemann began her foray into photography by documenting windows, a subject that she would return to throughout her career, and by learning as much as she could about the medium from Arno Fischer, Elisabeth Meinke, Roger Melis, Brigitte Voigt, and Michael Weidt, all members of Gruppe DIREKT. By the end of the decade, Bergemann was regularly accepting assignments from East German illustrated magazines, including Sibylle: Die Zeitschrift für Mode und Kultur. 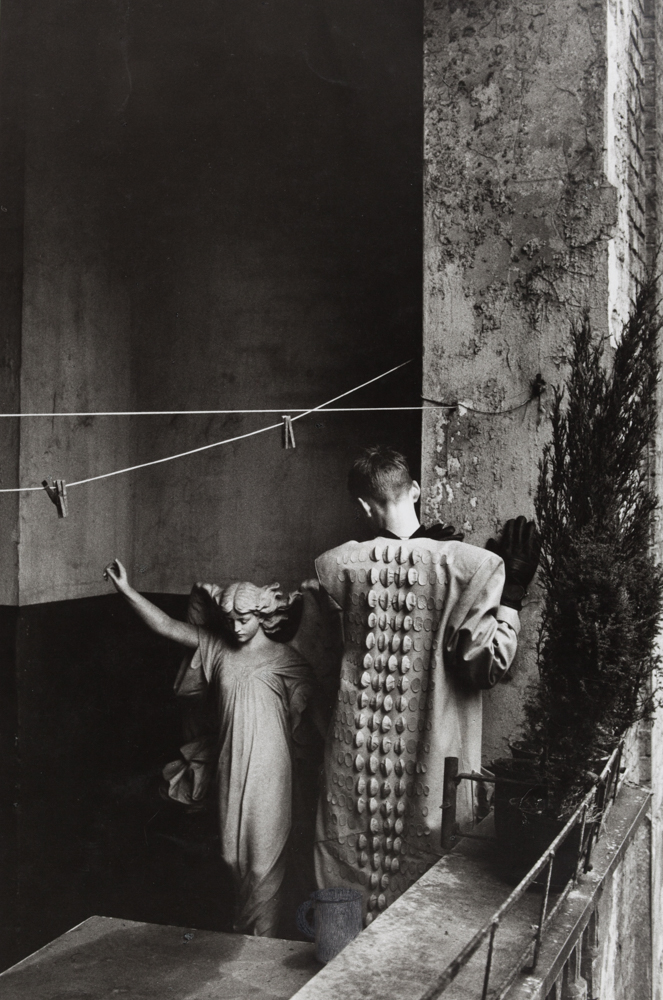 Bergemann would work for the popular fashion and cultural magazine for over three decades, photographing young models on the streets and contributing to the diversification of East German visual culture. She would also photograph her daughter, Frieda von Wild, wearing avant-garde designs by Katharina Reinwald and Angelika Kroker of the fashion, theater, and performance group Allerleirauh. One such photo, Frieda, Allerleirauh, belongs in the collection of the Stiftung Reinbeckhallen Sammlung für Gegenwartskunst.

Taken in 1988, this surreal black and white photograph captures von Wild standing on a balcony with her back turned to the camera. Surrounded by shrubs, an empty clothing line, and a stone angel, she is seen with her head turned to one side and her glove-cladded hands pressed against the balcony’s peeling stucco. This careful positioning brings attention to Allerleirauh’s leather jacket, particularly to its broad shoulders and scale-covered back, which falls like the angel’s dress. This subtly mimicry suggests that Allerleirauh’s designs—notoriously made from shower curtains, strawberry containers, and medical supplies, and modelled in living rooms, abandoned churches, and swimming pools—were not of this world.

In 2017, the Reinbeckhallen opened its doors with Sibylle Bergemann – Eine retrospektive Werkschau. The exhibition, which included one film and over 100 colour and black and white photographs, was complemented by shows that took place at the LOOCK Galerie and Kicken Berlin, and was accompanied by the catalogue Sibylle Bergemann (Kerber Verlag).

Sibylle Bergemann (*1941 in Berlin; †2010 in Gransee) is one of the most celebrated East German photographers. Both before and after the fall of the Berlin Wall, she travelled around the world to exhibit her photographs and to work on assignments for stern (Star), GEO, and The New York Times Magazine. Her photographs can be found in collections of the Berlinische Galerie, Berlin; the Deutscher Bundestag, Berlin; the Deutsches Historisches Museum, Berlin; the Staatliche Galerie Moritzburg, Halle; the Galerie für Zeitgenössische Kunst, Leipzig; the Sammlung F. C. Gundlach, Hamburg; the Sprengel Museum, Hannover; the Centre Régional de la Photographie, Nord-Pas-de-Calais; the Musée de l’Elysée, Lausanne; the Tate Modern, London; the Museum of Modern Art, New York; and Harvard Art Museums, Cambridge, Massachusetts.