Featuring the work of Romanian artist Dan Perjovschi, Drawing Politics was the Stiftung Reinbeckhallen’s second exhibition. Today, almost five years later, the site-specific installation made by the artist in the Reinbeckhallen’s exhibition hall appears, especially given recent events, in a new light and yet loses none of its topicality.

Perjovschi worked in the exhibition hall in the run-up to the opening of Drawing Politics, designing his works—drawings and collages—directly on the walls. The works seem like a direct, immediate response to an experience, an article or an image, and are put down on paper only once a suitable base has been found. The drawings, however, are researched well in advance, optimized and refined time and time again. They comment on social phenomena, established structures, abuses, and world politics or on things that personally affect the artist. 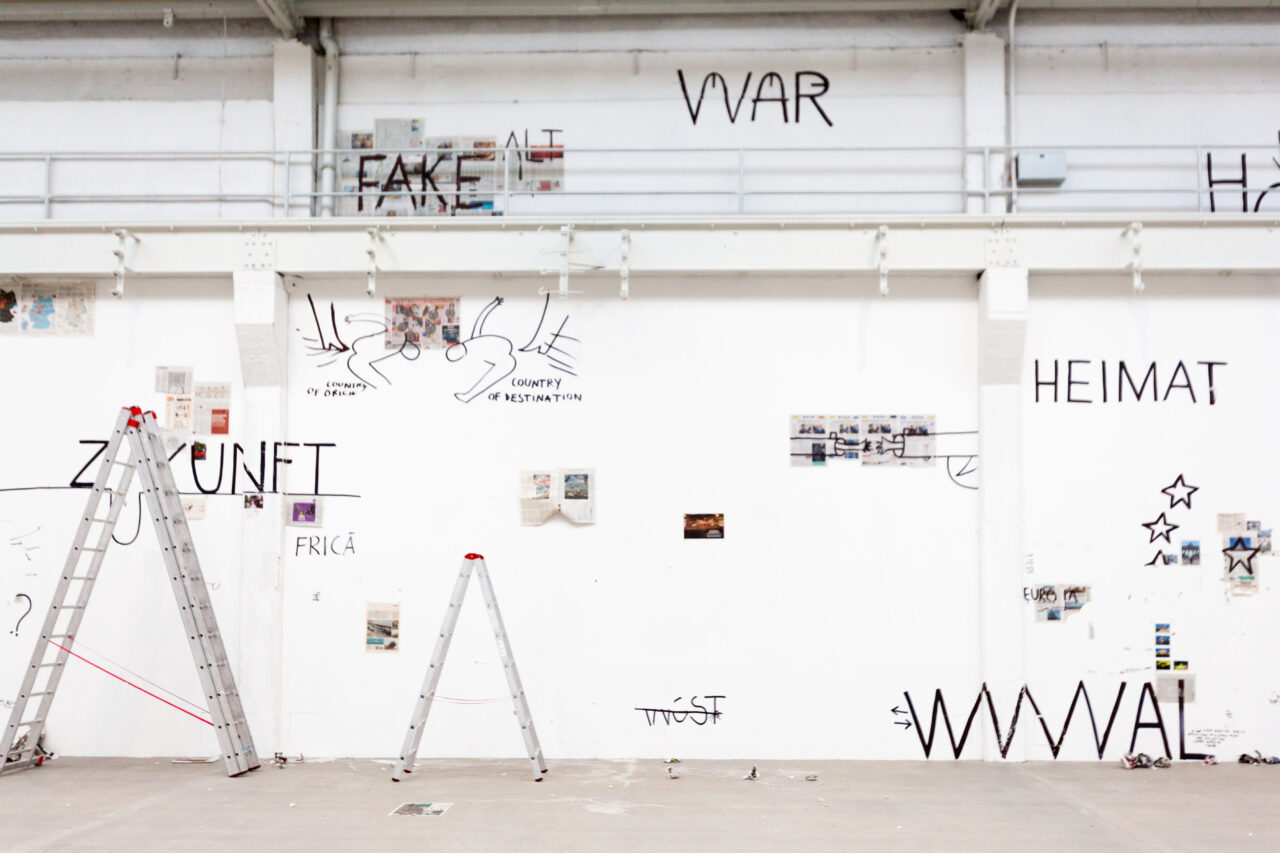 The artwork acquired by the Stiftung Reinbeckhallen was part of the installation and consists of four newspaper pages with drawings made with marker that extended beyond the paper onto the white walls of the exhibition hall. It shows the irony of a handshake in the shadow of rockets and mines. Perjovschi said it is a version of the Berlin Wall, but in Korea. We find ourselves in a world of divisions and some of them are chasms. The theme of Korea, the division of the country, the dictatorship of the North Korean leader, the South Korean obsession with freedom at any cost is not a new theme for the artist. In the last ten years, Perjovschi has had two solo exhibitions in the Total Museum of Contemporary Art in Seoul; both of which have explored, on the one hand, the sensibility and, on the other, the brutality of Korean society.

Dan Perjovschi has worked as a journalist since 1990 and has published drawings, mainly in Revista 22, an independent weekly in Bucharest, every week for the past 32 years. The artist, who admits to loving the print media, reads and collects newspapers, special publications on politics and culture, and tabloids too (just to see what drives the masses).

For Perjovschi, newspapers are an integral part of his life, the background of his artistic practice and, at the same time, an inspiration, as the exhibition Drawing Politics demonstrates.

Through his work, Dan Perjovschi creates a space for critical reflection and invites audience members to participate and be part of the dialogue. New drawings emerge every day and he keeps viewers up to date on what’s happening in the world and inspires them to both respond and react.

Dan Perjovschi (*1961 in Sibiu, Romania) lives and works in Sibiu and Bucharest, Romania.

In addition, Perjovschi has won prizes such as the Rosa-Schapire-Kunstpreis, Princess Margriet Award of the European Cultural Foundation and the George Maciunas Prize.