Nina Ansari (b. 1981 in Tehran) has created an extensive oeuvre comprised of installations, paintings, sculptures, drawings, prints and photography. With this complexity, she reserves an artistic and conceptual freedom. As different as these media are, they are united through the conceptual approach as well as Ansari´s biography, which runs like a thread through her work.

Her family fled to Germany during the first Gulf War when Ansari was four years old. A key moment for her in Iran was, when the interior of her house was briefly lit up by bomb blasts. The flash of light led to a new perception of reality. In her theoretical and photographic thesis Der Blick in die Fotografie (2010), Ansari dealt with the sense of sight, the human eye and the concept of seeing and gazing by examining the complexity of our perception with a camera. She described her role as an artist as an active one, the camera as a weapon, the approach as a conceptual one. The goal was to define the scope of photography. Today in retrospective she says, that she has exhausted this topic and thus answered the subject of photography for herself. 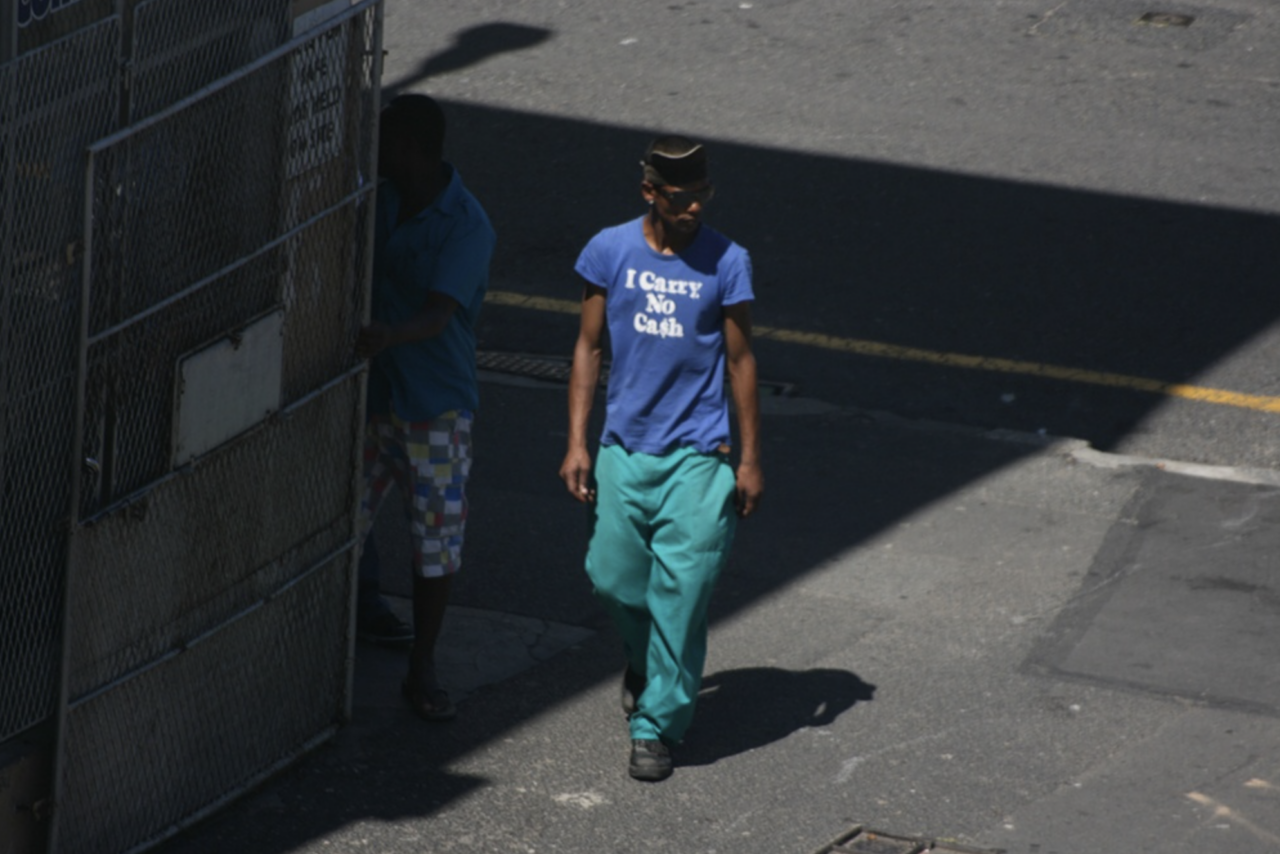 The following year she spent two months as an artist in residency in Cape Town. Ansari´s sojourn resulted in the photographic series I Carry no Ca$h. She moved into an apartment on Albert Road, located between the city center, a commercial area and the slums. Despite the proximity to a socially disadvantaged residential area, this series was a clear decision against photographing poverty. From the balcony of her apartment, Ansari photographed locals walking by and caught a bird´s-eye view of everyday life. As a photographer, she took a step back in order to capture unnoticedly the beauty as well as the danger. In summary, the series can be understood as a kind of visual diary.

The eponymous portrait of the series, which belongs to the collection of the Stiftung Reinbeckhallen, shows a young South African walking casually but purposefully across the street with a slight sideways glance. His clothes – loose baggy pants, a wide shirt, ear studs, big sunglasses and a sun visor turned upside down – testify to a sense of style and underline the charisma that lies in the way he walks and gazes. The white writing, I Carry no Ca$h, on his t-shirt implies the high possibility of an ambush though at the same time somewhat flirts with the daily danger. The series was included in GELD – WAHN – SINN, an exhibition that took place at the Reinbeckhallen in 2018 and was curated by Lena Fliessbach. After the exhibition, Sven Herrmann donated several works from the series to the Collection of the Stiftung Reinbeckhallen.

Comparing the series Blick in die Fotografie and I Carry no Ca$h, it can be seen that the medium´s self-referentiality gives way to the observant capture of a specific moment. The foreign country and the special light of Cape Town prompted Ansari to absorb everything rather than subject it to a conceptional investigation. The role of the artist changed to a passive one, the portraits stand for themselves and the series takes a unique place in her oeuvre. As mentioned at the beginning, the complexity, the situation-specific and subjective approach towards the media now very subtly become.